Click to send your short films for consideration for our 5th festival!

…as well as ongoing filmmaker/industry hubs in the USA in Austin Texas, and Los Angeles:

Note from Film Festival life. ‘We encourage committed filmmakers to submit via FilmFestivalLife. With monthly subscriptions and pro accounts FilmFestivalLife is the smartest way to save money with a strategic approach. Join the platform where award-winning filmmakers and quality festivals meet.’

The 2015 festival was rated 5/5 on Yelp (for exuberant reviews of our festival and filmmaker’s hub, click away!)

Founded in Australia and coming up on the 5th festival, Connect Film Festival has held 3 Australian events, a Los Angeles festival, and is expanding to numerous screening hubs in 2017.

Connect is an IMDB-listed festival granting 14 awards for short film achievement. 2014 Connect films screened at Cannes and won awards in festivals in Toronto, Melbourne, Los Angeles, Houston, and Berlin. 2015 Connect films included work by an Oscar nominated director, numerous feature film directors, and a sparkling collection of some of the finest industry talent in Los Angeles and throughout the world.

More than anything, Connect is a filmmaker’s hub and a creative movement. An idea born in a pub and raised in an art space, Connect celebrates superb short films and encourages a vibrant filmmaker community.

Revitalising what can be an exhausting “festival circuit,” Connect strives to inspire filmmakers to “connect with other creatives, and find future collaborators.”

Connect awards recognise a diversity of filmmakers and the creative team of cast and crew which drive an exceptional film. In addition to standard Best Picture and genre awards, Connect honours excellence in both theatrical and technical achievements of cast and crew:

Because Connect encourages a vibrant filmmaking community, Connect is a filmmaker’s hub, distinctive from much of the short film festival circuit in that:

• Connect redefines filmmakers: Unlike most short film festivals, Connect awards honour crew as well as actors and directors. Focus is on all filmmakers, not just directors or a few key players. All filmmakers are encouraged to attend the event, which is an ideal place to meet future creative collaborators. Everyone benefits from knowing another exceptional actor or film editor!

• Connect encourages collaboration: In order to be shown, all Connect Film Festival selections accepted must have a “commitment to Connect.” This is demonstrated by sending a “filmmaking representative” to the event, any member of cast, crew or support staff, who were involved in making the film. If time or scheduling makes this difficult, Connect filmmakers may commit to “Connect virtually” through a short Skype interview and email correspondence. This was true of every film shown in the Australian Connect Film Festivals, which included a text and email correspondence from a director in the Northern Hemisphere who could obviously not attend the Melbourne-based festival, but made himself available to inquisitive filmmakers and an enthusiastic audience.

• Connect shows the best films: We welcome the best work, not the best work of the last 5 minutes. Alongside darlings of the festival circuit, Connect allows filmmakers to show the favourite film they have ever made, be it that first breathless student film or last year’s award winning short that no one wants to see now that the glow of Sundance has faded. Great filmmakers do because we all want to be better. Without a date limitation, this is a great opportunity to showcase previous award-winning endeavours, as well as great overlooked films! Premieres are also welcome. The 2014 Connect Film Festival showcased a majority of newer films and premieres, but also short film classics from before 2005. The 2015 Connect Film Festival showcased films in 3D, shorts shot on film, and festival favorites nearly 20 years old (active filmmakers in attendance), alongside multiple premieres.

• Connect shows the most films possible: Short films are encouraged in order to offer an introduction to filmmakers work. Focus is on filmmakers and the teamwork behind making films as much as it is on the films themselves. Short high-quality work is prioritised as a way to create a diverse lineup and an opportunity to connect with more filmmakers.

Inspired by enthusiastic response in Australia, Connect Film Festival expanded to the USA in 2015 with an Los Angeles extravaganza at the 220 seat 4K Downtown Independent theater. Invitations to screen in competition were extended to less than 10% of applicants.

… and all this started in a vibrant Aussie pub! 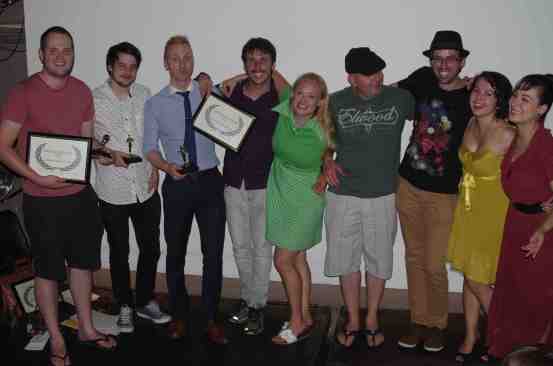